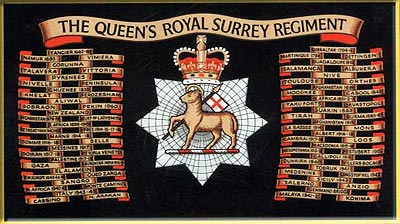 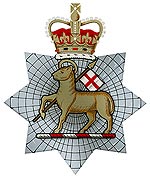 The Colours of the 3rd and 4th Territorial Battalions were identical to the 1st Battalion Colours with the following exceptions and additions. The Battle Honours Festubert 1915, and Gaza were borne on the Queen's Colours of the 3rd and 4th Battalions (TA) but NOT on those of the 1st Battalion. In commemoration of its service as 42nd Royal Tank Regiment, the 4th Battalion (TA) inherited from the 23rd London Regiment the Honorary Distinction of a badge of the Royal Tank Regiment borne on the Regimental Colour. This badge carried four scrolls; the first bore the dates "1941-45" and the other three the battle honours NORTH WEST EUROPE, NORTH AFRICA, ITALY.

This rare distinction was displayed at bottom centre of the Regimental Colour immediately below the Battle Honour Scrolls.

Battle Honours not borne on the Colours

The Cypher of Queen Catherine within the Garter

The Cypher consists of two "C"s interlaced within the Garter. On the Third Colour the Cypher is surmounted by a Crown. The Queen's was raised in 1661 for the specific purpose of garrisoning Tangier, which was part of the dowry brought by the Portuguese Princess, Catherine of Braganza, on her marriage to King Charles II. Thus from its inception the Regiment was associated with the Queen and was graciously permitted to bear her cypher upon its Colours.

Queen Catherine died in 1705, and the Regiment, designated for the first time "The Queen's" in 1684, continued to enjoy the distinction of bearing upon its Colours the Cypher of the Queen, or the Queen Consort until 1910. At this time new Colours were to be presented to the 4th Battalion The Queen's (Royal West Surrey Regiment) TF and a drawing prepared for these Colours bore the Cypher of the then sovereign, King Edward VII.

This distinction recalls the part played by The Queen's when acting as Marines during the Battle of The Glorious 1st of June 1794. The Regiment was embarked on board five ships of the Line - HMS Queen Charlotte (Admiral Lord Howe's flagship), HMS Russell, HMS Defence, HMS Royal George and HMS Majestic. The Naval Crown was granted in recognition of the Regiment's gallant conduct and contribution to this victory. It is borne on the Regimental Colour.

The Sphinx is borne on the Regimental Colour as a Battle Honour commemorating the part played by The Queen's in the Egyptian campaign of 1801, especially in the Battles of Aboukir and Alexandria, in which the Commander-in-Chief, Sir Ralph Abercrombie, was mortally wounded.

"Pristinea Virtutis Memor", may be translated as "Mindful of the Gallant Actions of the Past", and "Vel Exuviae Triumphant" as "Even in defeat there can be triumph".

The origins of both mottoes are obscure. It seems probable that "Pristinae Virtutis Memor" was awarded to the Regiment at some time in commemoration of its ancient services at Tangier.

It was long a tradition that "Vel Exuviae Triumphant" commemorated the fighting at Tongres in 1703 when Lord Portmore's Regiment with a Dutch Regiment held up the advance of 40,000 French for 28 hours and enabled the Allied army to assemble.

31st and 70th Regiments of Foot The East Surrey Regiment

Note: Battle Honours in bold were borne on the Colours